When The World Ends, We Burn All Night

Actor Andy Mientus first met actor-musician Van Hughes nearly ten years ago. Now Mientus, debuting as writer of both book and lyrics, has joined forces with Teen Commandments, a Brooklyn-based synth-pop band made up of Hughes, Brett Moses, and Nicholas LaGrasta, to create Burn All Night.

YAN CHEN: How did you start working together on Burn All Night?

ANDY MIENTUS: We met at my twenty-second birthday party in Santa Monica, California, in a bathtub. For real. And we were friends for years. Van was a musician as well as an actor, and I had this idea—a very vague one—about kids going out, with music that really sounds like the music they would belistening to. I wrote a quick, short script and sent it to Van.

VAN HUGHES: I had definitely wanted to write a show—it was serendipitous, the way that it happened.

AM: I wanted to make a show about the kids who were like me, and the kids I was encountering. We were at this stage in our lives when we were going out all the time and staying out until dawn having all these crazy experiences against this backdrop of the end of the world. I was feeling a lot of anxiety about world events—and this was during the Obama years. This was when things were good. I was thinking, what if we made those feelings hyperliteral and immediate? How would my friends and I react if the world was ending on this day? And so we started. 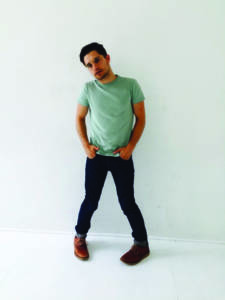 How did you start building that world of the show and the music within it?

AM: At our first meetings, I had the characters more than I had a plot. So we talked about who they were and who they would listen to. We literally made lists of bands: Holly listens to Sleigh Bells, Chvrches, and Charli XCX. We wanted the music to sound like those artists. Clue #5 Did you know Shakespeare fancied a freshly baked pie? You’ll find the answer on our instagram!

Van, what has writing songs for this musical been like compared to your songwriting process for Teen Commandments?

VH: In a way, my experience with Teen Commandments is parallel to what the characters in our show experience. I just met Brett at a party, and we became good friends and started writing together. Then he started this band with his roommate Nick, and we also became friends and started going out in Brooklyn and writing together. It was when they had already started helping me write the show that we thought, “Maybe we should all do this together,” and then it was a couple years later that I actually joined Teen Commandments.

And like Andy was saying earlier, we’d both been in the musical scene for a while. Especially when you’re doing workshops, you learn how they’re made. I thought: what if a show didn’t follow the standard theater form as much? I wondered if I could get away with lyrics like you would hear on an album, or the radio.

AM: Nick and Brett check us and keep us in the synth- pop world, which is great for us. Anything that’s too musical theater, they tell us so.

VH: We want it to be authentic—we’re just giving you a song the way you hear it. The way I imagine sound for the show, the music should be all around you, the way that you hear pop music in a club or party environment, not just coming at you from one side, like in a proscenium theater.

In what other ways does Burn All Night depart from traditional musicals?

AM: What’s funny is, Van and I are from this world—we’ve worked in theater for a lot of years, and we really love it. So we actually play by some pretty traditional rules, but we try to subvert them. In classic Rodgers and Hammerstein musicals, characters sing when they can’t speak anymore, when words alone aren’t enough to convey what they’re feeling. So we thought, what if we take that same idea, but have them sing when they have to escape the scene, because what’s going on inside of them is too much to bring up?

VH: They break away to divert into their own mind, like a music video or a soliloquy, and then come back to the scene. It’s a common trend with people of our generation, with their phones. In a tricky situation, you might just be like, “Oh, I’ve got a text—”

AM: —and just look away. You’ve got a whole private thing going on while you’re doing something public, texting “I am so sad, I am so anxious, I am so… whatever.” 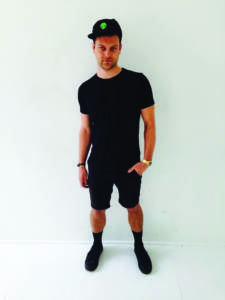 That contrast is an interesting way to bring out the frustration and anxiety you were mentioning earlier. Could you talk about how the show developed out of those initial experiments?

VH: For a long while it was a back- burner project; I would say three or four years. The reason that Teen Commandments haven’t put out so much music is that we’ve been writing the show, and we have work in the can that we’re hoping to deliver soon.

AM: From start to finish it was close to ten years, but in actuality it was more like two years of hard, fast development. Then, when our director Jenny Koons came on two years ago, things really changed for me as a book writer. She gave me strong guidance in helping shape disparate ideas and characters into one streamlined whole.

So the show has been a long time in the making. Andy, what was it like for you making the transition from actor to writer of book and lyrics?

AM: It’s scary, because I’ve always written things for myself, but to take myself seriously enough as a writer is a big leap. I wish I could say that I’ve developed a great deal of confidence—I feel that I’ve developed a great deal of bravado, and I’ve realized that life is short. There’s no time to be scared of yourself and your abilities. I want to do this, and enough people on my team seem to believe in this thing, so why not put it out there and see what happens?

Jenny was really instrumental in giving me a process and telling me, “Normally, this is how this works.” She wrote out all the songs and scenes on notecards and laid them all out on the floor, which looked very similar to a scene that I had with Debra Messing in NBC’s “Smash” when she was teaching me how to write a musical by using notecards. I sent that screenshot to Jenny, and she said, “Oh my God, we look great.” So that’s a real thing that people do—I thought it was just made up for TV. It’s really useful to have everything laid out that way.

A driving factor for Teen Commandments’ music is dance, which will also feature prominently in the show. What role does dance play in the storytelling of Burn All Night?

VH: It’s a release in the same way that the songs function. The world is coming to an end, and I have to distract myself.

AM: Dance is so much a part of this world that we’re trying to invite the audience into, and I feel so lucky that we’ve got Sam Pinkleton as our choreographer. He is a big believer that everyone is a dancer. In the show, we have a diversity of body types and experience, of people who don’t look cool, but who dance with such abandon that they do look cool. He knows how to capture that and shape that.

What do you hope OBERON’s club-theater setting will contribute to audiences’ experience?

AM: I want them to feel that they’re in on something, the way you feel when you stumble into that after-hours party and something unbelievable is going on. You’ve been given a window into a world that you might not ever have gotten to see otherwise.

VH: It’s also an inclusive environment. Not necessarily that you’re a voyeur, but you’re a part of it.

What else would you like to express to audiences before the premiere?

AM: Even though we’ve talked about how di erent this musical is, it’s rooted in love for the genre. And although we’re writing about cool kids and cool scenes, there’s a lot of heart and humor in them. These people try to be cool, but they’re just lumpy, gross, normal humans trying to look out for each other.

VH: They’re just young, and everyone was young once. It’s like New York City in the seventies. Same thing. City going bankrupt. The world is ending. People were out at Studio 54 hitting it hard and blowing o steam. It’s a desperately universal thing.

Yan Chen is a second-year dramaturgy student at the A.R.T. Institute for Advanced Theater Training at Harvard University.

Andy Mientus with Teen Commandments at Feinstein’s 54 Below Singing “Famous” from ‘Burn All Night’: