American Repertory Theater (A.R.T.) at Harvard University announced on April 12, 2021 that Diane Borger will step down from her role as Executive Producer on June 30, 2021 in order to return to her home in London. She will join A.R.T.’s Board of Advisors this summer. 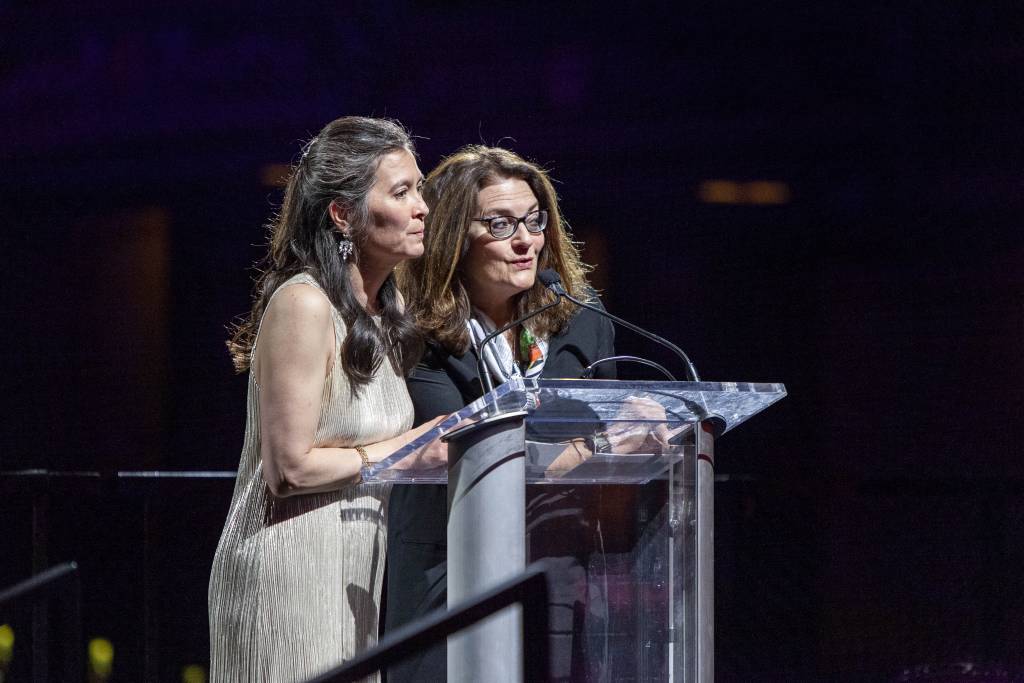 “Diane Borger’s impact on the A.R.T. has been transformational, from the very first show she produced—the groundbreaking, immersive Sleep No More—to her active mentoring of Harvard undergraduates into careers in the field,” says Paulus. “I have witnessed with awe and admiration her remarkable ability to build relationships with artists and provide conditions for bold, risk-taking work to flourish. As a director, I have experienced time and again her genius in understanding the creative process, from her dramaturgical insights to her steady guidance in delivering a production. I will forever cherish these last twelve years of our creative partnership.”

Borger and Paulus have worked closely to advance A.R.T.’s mission to expand the boundaries of theater, always including the audience as a central partner. Together, they have made A.R.T. a home for emerging and established artists from myriad disciplines to take risks as they create and incubate new work, drawing on the research opportunities afforded by the theater’s relationship with Harvard University. New plays and musicals developed in Cambridge over the past twelve years have gone on to reach audiences across the country, on Broadway, in London’s West End, and around the world, including at the Edinburgh International Fringe Festival, and in Australia, Japan, South Korea, Monaco, and China.

Prior to the A.R.T., Borger served as General Manager of the Royal Court Theatre and the Deputy Head of the National Theatre Studio in London. Her longstanding relationships with British artists laid the foundation for numerous collaborations at the A.R.T. In 2011, John Tiffany used A.R.T.’s club theater OBERON to develop the stage adaptation of the film Once. The musical, featuring a set inspired by OBERON, won eight Tony Awards in 2012. Tiffany returned to A.R.T. to direct a new production of The Glass Menagerie that transferred to Broadway in 2013 and received six Tony Award nominations. Other collaborations with artists and theaters from the UK and Ireland include the world premiere production of Wild Swans, an adaptation of the book by Jung Chang co-produced with the Young Vic Theatre of London, and visiting productions of The Plough and the Stars, 1984, and Barber Shop Chronicles.

As the A.R.T. liaison to the Harvard-Radcliffe Drama Club and the Producing Associate in Harvard’s concentration in Theater, Dance & Media, Borger has mentored and advised students making work at the Loeb Drama Center and across Harvard’s campus, as well as those developing work in collaboration with the professional staff of the A.R.T. These projects have included A.R.T.’s family shows, which for the past three seasons have been written, composed and performed entirely by Harvard undergraduate students (The Emperor’s New Clothes, Thumbelina: A Little Musical, and Jack and the Beanstalk: A Musical Adventure). In the fall of 2020, Borger taught “Nonprofit Producing: Resourcing Creativity and Innovation,” the first producing course ever offered in Harvard’s Theater, Dance & Media concentration.

“Diane’s mentorship changed the lives of an entire generation of undergraduates, including my own, by giving us the confidence to pursue a career in the arts and entertainment,” says Kevin Lin ’12 who first met Borger as an A.R.T. intern when he was a biology concentrator at Harvard. He is now an agent and co-head of the Cultural Business Strategy Group at Creative Artists Agency. “For so many of my friends and colleagues in the theater industry, she guided us towards and helped us chase professional opportunities that otherwise would have felt impossible.”

A.R.T.’s Spring Celebration on June 5, 20201 will feature special appearances and performances from past and upcoming productions, and will include a tribute to Borger.

“It has been a privilege and a joy to serve as the Executive Producer of the A.R.T.,” says Borger. “When I agreed to come to Cambridge in 2009 to produce Sleep No More, I never imagined it would be the start of twelve of the most extraordinary years of my career, and that I would land in such an incredible partnership with Diane Paulus. I am grateful to the staff, boards, volunteers, and esteemed Harvard colleagues with whom I’ve had the good fortune to work over the past decade. A producer’s work is rooted in relationships, and I have the most enormous appreciation for the remarkable students and artists with whom I’ve been lucky enough to collaborate.”

“All of us at the A.R.T. are grateful to Diane for her transformative leadership, artistic intuition, and ability to build meaningful strategic relationships,” says Andrew Ory, Chair, Board of Trustees. “We thank her for her stewardship of the theater through this year like no other and for helping to launch A.R.T.’s process of building antiracist and anti-oppressive practice into our structure, culture, and governance, setting an important foundation for the institution’s next chapter.”

A search committee composed of A.R.T. staff and board members has been formed to select a search firm and lead the process to identify the theater’s new co-leader.

Diane Borger joined the American Repertory Theater in the fall of 2009 as the Executive Producer for Sleep No More, and took on the full-time position of Producer for the A.R.T in January 2010 where she partnered with Terrie and Bradley Bloom Artistic Director Diane Paulus to make A.R.T. a home for emerging and established artists to take risks and create and incubate new work. Prior to A.R.T., Borger spent over a decade as General Manager at the Royal Court Theatre in London, where she produced more than one hundred and fifty productions, including The Seagull, Rock ’n’ Roll, The Weir, Jerusalem, A Number, and My Name is Rachel Corrie, which transferred to New York. Previously Borger spent thirteen years as Deputy Head of the National Theatre Studio of Great Britain, where she oversaw the readings, workshops and classes for some of the most prominent playwrights, actors and directors in the United Kingdom. Borger has a Master of Arts in Theater from The Ohio State University.