Eric Tucker is the Artistic Director of New York-based theater company Bedlam and the director of their Sense & Sensibility, adapted from Jane Austen’s novel by Kate Hamill. Revisiting classic texts with a signature wit and vibrancy, Bedlam’s minimalist approach to design relies on actors, language, and fast-paced staging to reimagine entire worlds onstage. In this interview, Eric reflects on the inspiration, and the creative process, for this production.

Bedlam was formed only five years ago, but your productions, including Saint Joan, Hamlet, and Twelfth Night have run for multiple years (and visited Boston theaters including, most recently, Central Square Theater). What makes this theater company’s work unique?

We place a premium on the text. We’ve always gone about trying to tell the stories from an angle that makes them feel like they are new. We work to get the words into our bodies, and I think that’s what people respond to: they become able to hear the play, hear the magic and genius of the writing. People hear things they haven’t heard before, and I think that’s where the success started.

The other added element that you’ll see in Sense & Sensibility, is the fact that we try to use only what we need so that our imaginations have to ll in quite a few holes, and then the audience’s imagination has to beat us there. That’s what keeps it theatrical, and different from a movie.

How did Sense & Sensibility get started?

We were in the middle of doing Hamlet and Saint Joan, and those shows actually took up our first couple years, because people liked them, and they were able to keep running.

And in the middle of that, Andrus, who was my producing partner at the time, and who was playing Joan and performing in Hamlet, was Kate Hamill’s roommate. In the middle of those productions, Andrus said, “Kate’s doing an adaptation of Sense & Sensibility.” Andrus brought it to me, and I read it, and I thought it was great because it moved the action forward without narration.

So many literary adaptations depend on narration—Kate’s adaptation is so economical. Because of the way it moves, I think it’s satisfying for audiences in the same way that a musical can be. It’s really funny and quirky, and so Jane Austen.

The set of Sense & Sensibility moves with or around the characters on stage. What inspired this staging?

When I read this script, I thought, “Wow, there are so many locations. This thing could take forever if we stage it traditionally and don’t find a way to make it flow: now we are in a different room, now we are in a parlor, now a park…”

A lot of that has to depend on people’s imagination. I wanted to find a way for the text to keep moving forward while the scenery keeps catching up, so that you don’t really have to stop and wait for a traditional transition. That’s actually kind of a theme in my work.

So I thought, “What if everything was on wheels—all the chairs, windows, doors, tables?” I asked our set designer to build that stuff so we could play with it, and that’s how it came about. 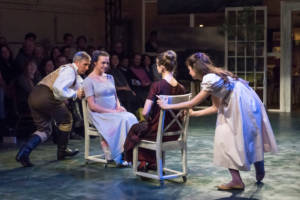 In addition to a moving set, you’ve also double-, triple-, even quadruple-cast actors. Is this typical in productions that you direct?

Doing things very bare has always been my directing style. I’m always talking a lot about ideas and then paring things down. When you set yourself up with obstacles from the beginning, such as, “we are going to do this giant play with only four actors and not a lot of stuff,” you’re giving yourself a ton of hurdles that you have to figure out how to get over.

It forces you to use your imagination in ways that you might not if you had a lot of scenery and props and money. When I direct for Bedlam, I try and push the line—I try to scrap everything we don’t need. And our audiences expect that.

In Kate’s play there are the gossips— people are always watching other people in this story—and you need those bodies. You could do it very traditionally, with 18- 20 people, but I think part of the fun is the presentation of the double casting. I think that is very satisfying for an audience.

Could you talk about the role that rumors play in this adaptation of Sense & Sensibility?

That aspect of the play is universal. That sort of intrigue and gossip resonates with everybody. Now, more than ever, talk—even when it’s not necessarily founded in truth— can whip up a whole firestorm, and people will believe everything they hear. If there are enough people saying it, it has to be true. And when it’s really intriguing, you kind of want it to be true. There’s also an aspect of it, too, that sounds like, “so-and-so is having a rough time, and that makes me feel better about myself.” Nobody says that to themselves explicitly, but we certainly feel it—that’s human, right?

We tried to get that aspect of Sense into our staging. It’s an animal thing, like sharks or a piranha, or a wild pack of dogs that can’t help themselves. It’s fun to sit around in a group and talk about people, even when it’s not malicious. That’s just the way it is. But in Sense & Sensibility, Austen explores how that behavior can be insidious and how it can really hurt people’s lives. Because for those women, their reputation was everything. It’s still like that today, maybe more than we would like to believe.

Regardless of their exposure to Jane Austen, what should audiences know coming into Bedlam’s Sense & Sensibility?

Whether you already love, love, love Jane Austen and know Jane Austen, or you’ve never read one of her books or seen a movie, this show is a great time in the theater. It’s not going to feel like you’re sitting reading a big literary novel. It doesn’t feel antiquated. It feels very fresh and now.

Of course, we manipulate that a little bit by allowing some modern-day civilities to creep in, but at the same time we try to stick to the social forms of the time in the production. You feel like you’re part of the action. It’s very communal. It’s really fun. I want people to know that: it’s just fun. And nowadays, it’s nice to go and have things that are a little bit of an escape from the everyday.

Interview by Annabeth Lucas, a dramaturgy student at the A.R.T. Institute for Advanced Theater Training at Harvard University (’18).

Bedlam can also be seen in Boston in March 2018, when their productions of Hamlet and Saint Joan (both directed by Eric Tucker) will run in repertory at ArtsEmerson.

FINAL PERFORMANCES — Bedlam’s high-octane adaptation of Austen’s novel is only here until Jan. 14, 2018