In Conversation with Playwright Idris Goodwin

Along with How We Got On (produced by Company One in 2013) and The Realness, Idris Goodwin’s Hype Man is part of his break beat cycle. Production Dramaturg Jessie Baxter sat down with Idris after an October workshop session to chat about his newest addition to the cycle, finding source material from friendships, and the role of artists right now. This piece was originally published in conjunction with Company One’s 2018 world premiere of the play, and Jessie and Idris reconnected during filming for the 2021 digital production.

Where did you find the inspiration for Hype Man? 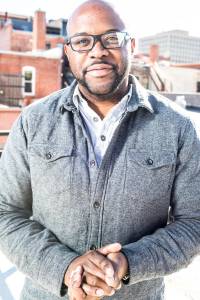 Hype Man is the third in my series of “break beat plays,” which are plays about Hip-Hop in America and the way Hip-Hop has affected our personal relationships, our dreams and aspirations, our politics, everything. So this one, Hype Man, focuses on an interracial Hip-Hop group and the question of responsibility. Does participation in an art form like Hip-Hop—which has roots connecting to street organizations, to the Civil Rights movement and the Black Arts movement, and has been a tool for people from low-income areas to literally change their lives for the better—mean you owe something? When Mike Brown got shot, I heard the rapper David Banner say in a freestyle: where were all the white rappers standing up and saying something? That sparked the whole idea that this play should be about a white rapper who is being asked to say something and doesn’t want to, not necessarily because he believes that this incident was just or unjust, but because he’s like, “I’m not that type of artist.” So it’s really a play about ethics, you know? What is required of us when we see injustice of some kind?

Hip-Hop has been a major cultural influence for a long time, but its mainstream popularity and presence on the charts comes in waves—right now it’s at a high point. As pop culture’s relationship to Hip-Hop changes, does that affect your approach to the break beat plays?

Yes and no. This is the first break beat play that’s set in the present, so that’s significant. The last two were set in earlier eras, so responding to the present moment has been challenging in its own ways. I do think we’re in an interesting moment where the spirit of Hip-Hop, the sort of radical defiant edginess of it, is now also popular. Whether or not it’s shallow or it’s for real is beside the point, but just evoking that spirit of radicalism, as a Beyoncé or as a Kendrick Lamar, is really exciting. So I definitely think the play is speaking to that.

Something we’ve been talking about throughout this process is how the core of the play is really about friendship—how friendships might change over time, and why sometimes, by necessity, they must. What’s important to you about that core relationship between Pinnacle and Verb?

I’ve had a lot of friendships in my life that have been based around a shared love of Hip-Hop, with a lot of friends of different races. Sometimes I think part of what brought me to Hip-Hop was, yes, the beats and the rhymes and all that, but also the spirit of it spoke to me. The spirit that you don’t have to assimilate, you can wear the clothes that you wear in your neighborhood, and you can use the slang that you use. I don’t know that my friends of different races resonated with that idea in the same way. So that was my starting point: questioning what it even means to be a “fan” of this music and this culture. I don’t know what it looks like to “just” rap. I make rap music and I explore Hip-Hop as a culture as a means to do a lot, and it’s deep for me—it has to do with claiming my position and claiming space as a person of color. I don’t know any other way, so I don’t understand when folks are like, “I’m just having fun. I just want to rhyme some words.” I get it on one level, but I just don’t know what that’s like. So in the play, how do we explore that idea between those two guys? What brings them to the stage, and what brings them to Hip-Hop personally? What do they get out of the act of doing it? Is it just for money, is it just to be seen? And then also there’s this dichotomy of front man and hype man, and that’s an interesting dynamic in performance and very symbiotic.

How did you think about the musical influences for these characters?

In writing Pinnacle, I was listening to and watching it all—Macklemore, Machine Gun Kelly, Yelawolf, Mac Miller, G-Eazy—all the lanky white dude rappers with sleeve tattoos. I would see these videos of them answering questions about race and responsibility, and I was really interested in the question of what if all those guys were in a room together? Next, writing Peep One was interesting, because she really looks up to Dr. Dre. There’s something about Dr. Dre as an engineer, not just a beat maker. His sound—and what he could achieve with just sonics, EQ, and mastering—made Hip-Hop music sound so much cleaner and bigger, but without sacrificing any of the grit and the attitude. So Peep is someone who aspires to that, and that’s why, once she gets in the group, they’re able to get on “The Tonight Show.” It’s because of what she brought to the group.

Peep One is also an exciting character because there aren’t a lot of prominent women in that engineering role, and it’s interesting to see her creating a new model for that kind of artist.

There’s a very dope beat maker out of the Bay Area named Georgia Muldoe, who I was thinking of when writing Peep One, but I think Peep’s sound is completely different. And then there’s DJ Pam. You think about all these women who we don’t see a lot in that capacity, like on the wheels of steel or behind the boards, but they exist. With the break beat plays, I am really interested in shining the light on the everyday working class and the everydayness of the art form. Pinnacle, Verb, and Peep One are probably the most “successful” of any of the break beat characters—this is as close to a real rap group situation that any of the plays is going to deal with. So the question is, now that they have this platform, what are they going to do with it? So to go back to Peep, I wanted to make people think about that: who are the ones you do know? Did you think, “Oh wow, there are women doing this?” It’s important for me that all these break beat plays have women in significant parts.

Conversations about identity and privilege have a big presence in Hype Man. Do you think that theater can uniquely grapple with those ideas compared to other mediums? Why use a play to ask these thorny questions?

The theater has always been a place for illuminating and humanizing our ethical and moral struggles, it’s always been that. Because of the nature of the form itself, you have the opportunity to take people on a journey in real time and really let people sit with it and wrestle with it in a unique way. Of course you can go to a film, and do that in music, but there’s something about the way theater exists in time—when executed well—that can have a lasting impact.

As you mentioned, this play poses questions about responsibility; do you think artists have a particular responsibility in this current moment?

I think we’re in an all-hands-on-deck moment. Artists know what we need to do, but we can’t be afraid or shook, like, “Oh, what are the subscribers going to think?” Don’t worry about pissing off mom and dad—they’ll be fine, and you’ll be fine. But a lot of other people won’t be fine, and not because of a mean play or whatever. This is for real, people are suffering and getting their rights taken away. So if we can do something as artists and creators and facilitators, to create spaces for empathy and for understanding, let’s do it. Let’s do it a thousand times, and let’s do it right now. Without any kind of trepidation or ridiculous fear of offending someone, you know? And even when we do offend someone, as we inevitably do, let’s not shy away from that conversation either and apologize. Let’s exemplify civility, let’s exemplify risk-taking, let’s exemplify the best intentions. Let’s exemplify all that, and messing up and failing are part of it too. I am extremely excited and motivated to do our part, from our side of things as makers of space and storytellers. Let’s go, let’s get to it.

You’ve previously talked about how this play was written amidst the height of the Black Lives Matter protests that followed Michael Brown’s death in Ferguson during the second half of the Obama administration. Have there been any surprises or discoveries you’ve made about the play now that it’s been out in the world for a bit? After the nationwide demonstrations in response to the murders of Ahmaud Arbery, Breonna Taylor, George Floyd, and others this past year, does the play’s conversation about accountability and justice take on new meaning for you?

Hype Man has always been an American play. I never designate exactly where they are because A) Hip-Hop is everywhere and B) Issues of police brutality and anti-Blackness are everywhere. This play has had such a journey indeed. Admittedly, however, I have mixed feelings. I wish it wasn’t always so timely. As I write this, Officer Derek Chauvin is on trial for the murder of George Floyd. Obviously every writer wants their work produced into eternity, but I would love to be able to one day say this play is a relic, representing a social climate we have collectively moved past.

What excites you most about seeing your work in this new format? Was a Hype Man film ever something you envisioned when you initially conceived the story?

Access is something I value. So this format just allows for much greater access. I also know there are a lot of theaters that really wanted to produce the play but just didn’t feel they understood enough Hip-Hop, etc. This allows theaters who may not have the resources to have access to the piece, not to mention educational and community-facing entities. Company One’s commitment and connection to this play has only deepened since Hype Man‘s premiere in 2018, and I am so glad there is now a permanent document of our collaboration.

Jessie Baxter is Company One’s Creative Producer and worked as the production dramaturg for their production of Hype Man.

A (Selected) Timeline of Hip-Hop and Hype Men

From The Last Poets to “When the Revolution Comes” to Cardi B’s “Bodak Yellow.”

From The Last Poets to “When the Revolution Comes” to Cardi B’s “Bodak Yellow.”

The Revolution Will Be Harmonized: Social Protest in Song

Songs have been used as a form of social and political protest since the country’s founding.

Songs have been used as a form of social and political protest since the country’s founding.

Staying in the Room

Filmed up close and personal, Company One’s Hype Man asks us who has the responsibility to speak up in the face of social injustice.